An ambassador for our Industrial Partner’s Club: Gonzague Dejouany

You are here: Home1 / News2 / An ambassador for our Industrial Partner’s Club: Gonzague Dejoua...

The German-French Academy for the Industry of the Future is currently assembling its Industrial Partner’s Club with the help of the Fondation Mines-Télécom. Gonzague Dejouany was the very first individual donor to commit to this project. In this interview, he tells about his motivation to support the Academy. 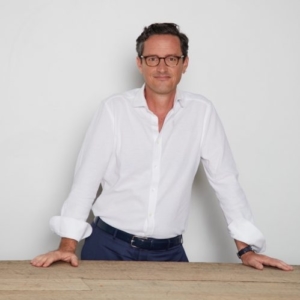 Gonzague Dejouany is a major donor to the Academy.

Mr. Dejouany, could you tell us a little bit about yourself?

Having received a below-average grade in German on the entrance exam for Sciences Po in Paris, I decided to pursue a degree in economics in Germany. I witnessed the fall of the Berlin Wall and the years that followed there, during which I forged enduring friendships. Since then, I have always been involved with Germany, both directly or indirectly. After 20 years at VEOLIA and EDF, most recently as CEO for Germany in Berlin, I returned to France to found Nesting. Nesting is a French-German startup consulting firm. This year, I am collaborating with a French investment fund to set up the first French-German innovation fund: ALHAMBRA Smart City Innovation Fund, which will support and develop the European champions of the sustainable and digital city of tomorrow. Energy, mobility, smart infrastructures, and management of all kinds of urban flows will be at the heart of ALHAMBRA’s activities.

Could you tell us about your involvement to French-German relations?

In 2012, I created the French-German Economic Circle in Berlin, a platform for exchange between the economic and political worlds of our two countries. When I returned to Paris in 2016, I redoubled my efforts by creating “Ensemble, l’énergie positive franco-allemande”, a think tank designed to formulate a number of concrete proposals for modernizing this cooperation in view of the new Treaty of Aachen signed on January 22 of that year. In that capacity, I aspired to actively promote the creation of a European business code and the development a French-German commercial code. Since the signing of the Treaty of Aachen, I have been campaigning for the development of concrete initiatives that benefit innovation in both our countries. To put it bluntly: There can be no Europe without a strong and powerful French-German axis. And vice versa. It’s part of its DNA. The only level of scale that meets the full scope of our ambitions is the European level.

Why did you decide to support the German-French Academy for the Industry of the Future?

It’s simple: the key words that form the backbone of my work and commitment are in the very name of your organization. In Europe, we need powerful mechanisms to support and accompany innovation in order to maintain and even improve our European excellence in terms of technological know-how. For this to happen, we must move forward and find the necessary financial resources to ensure that our talents remain and prosper in Europe while we continue to sell to the rest of the world. That is your endeavor, and I want to be a part of it with you.

What form will your commitment take in the coming months?

In addition to my contribution as a major donor, my commitment will focus first and foremost on promoting the German-French Academy to my networks: spreading the name and work of the Academy wherever possible; explaining the vital need, I would even say the dimension of public welfare, which comprises research-innovation-economy triptych, which must be developed, funded, and Europeanized. To be an ambassador for the Academy so to speak. I would also like to contribute to the emergence of scale-ups by connecting startups, which the Academy is supporting between our two countries, with potential investors. Finally, based on my experience of the French-German relations, I will take on an advisory role to the program leads at Institut Mines-Télécom in order to contribute to the development of this great political and economic project.